Bold text represents terms that are very important and/or will be further discussed via further writings or sketches. I will always ATTEMPT to present the continued information in the order I present them in the original work but that may not always be possible do to story continuity or other reasons but they will all be covered eventually.

The Oblivion is the consumer of the multiverse. Generally, it appears at one edge of a universe and absorbs it in a singular direction, it appears as a milky fog. Almost nothing else about it is known because it gives off no readings of any kind other than visually. Nearly all attempts to study it have met with failure. All objects that disappear into the Oblivion are lost. None have ever returned. Reaching out about 100 lightyears from its edge is “The Crawl”, Long tendrils of smoky looking white “fog” that reach ever on into whatever universe it is currently devouring. Some study has been done on this area of The Oblivion, but at great peril and cost. Any object that enters The Crawl will be pulled by an ever increasing gravity toward The Oblivion. Surprisingly however, it exerts no other destructive force. At times it will appear that the tendrils of The Crawl will attempt to curl around an object entering its space, but this is highly subjective. Even entering The Oblivion itself seems to not offer any destruction. Ships, Asteroids, Worlds, and anything else it covers is consumed with a whimper, seemingly whole and then it is lost. No signal of any kind has ever been received from inside The Oblivion. The few ships that have escaped from The Crawl have described it simply as being in an ever deepening fog trying to fight and ever increasing gravimetric pressure coming from the Oblivion Proper. The only thing else to ever come out of the Oblivion are Oblivion Wraiths.

To truly talk about The Oblivion one must learn about its discovery and progression. Most species throughout the multiverse have come to describe the progression of The Oblivion as a series of Great Crushes. This may be due in part to the fact that many people report hearing “a crushing sound” as The Oblivion nears their planets. This lasts for a short while only when The Oblivion can first be seen and then The Oblivion is silent again even as it consumes said planets. 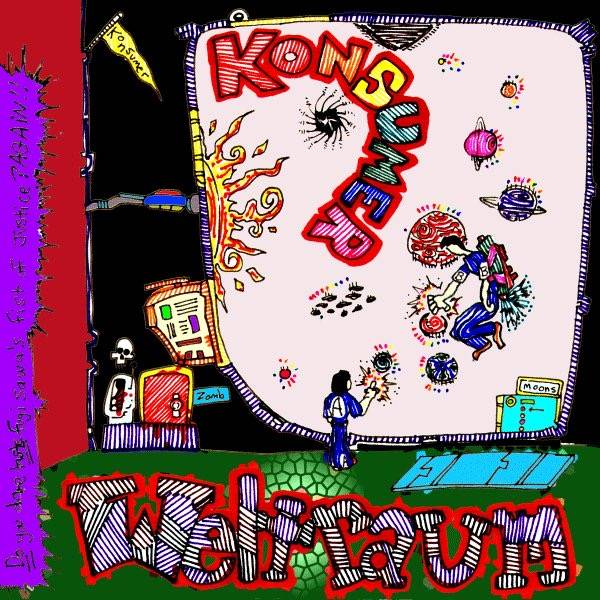 The exact beginning date of The First Great Crush is unknown and hard to guess at. What is known is that it was first discovered by a group of multiverse traveling heroes known only as “The Six.” This was long, long ago when the multiverse was young and still full of what many considered to be infinite universes, which was close enough to being true. The Six had encountered many destructive forces in their centuries as champions of the multiverse, but The Oblivion was wholly new to them and it could not be countered by them by any means. Magic, Technology, Psionics, none of them had any effect on the all-consuming force. The Six tried in vain and watched dozens of entire universes be consumed by The Oblivion.

In a last ditch effort to at least gather some information about The Oblivion it was agreed one of them would try to deeply enter the Crawl and then attempt to relay some information back. They had already done so in many ships with varying defenses but had been unable to get much further than any other ship before them.

All six of them possessed immense power individually. Many worlds and even galaxies considered them to be Gods, or something more. Their master of magic, Raine, developed an incredible spell that would temporarily give all of their combined power to a single member of their team. The one finally selected for this mission was a being named Dran. When they were prepared the spell was cast consuming an entire star, and the power of all the other 5 flowed into Dran. Dran’s visage transformed and he looked like a sea of sparkling chaos. To protect the life force of the 5 while he journeyed into The Oblivion, he plucked out his own heart and gave it to them. It looked like a giant black and purple diamond and glowed with its own light in shimmering pulses.

And so Dran left their ship and headed toward The Oblivion. The other 5, incredibly weakened, were barely able to erect a shield around their ship using Dran’s Heart, as they watched on from the ships bridge.

Dran was easily able to communicate with them psychically, even over the vast distance due to his new power, and gave them updates as he began to enter the Crawl. At first he reported feeling no sensations at all. He reached out with magical and psionic senses, newborn into him from the other five’s power, and tried to learn all he could. For 7 days he reached out over vast distances searching for any information he could about The Oblivion, The Crawl, the fate of the other universes it had consumed, and alas, discovered nothing. The Six were frustrated beyond reckoning. On top of their frustration the 5 who had been left on the ship were growing incredibly weak. They had not only imbued Dran with their power but also with a huge portion of their very life force. More of their life force in fact than they had intended to. They told him he needed to come back to the ship.

Dran’s frustration became fury. Not at the 5 but at The Oblivion itself. It was also honest to say he may have become quite drunk with power. With their combined power Dran felt beyond invincible. He had destroyed over 100 Oblivion Wraiths during his time in the Crawl with absolutely no effort. His senses had expanded beyond mortal comprehension yet he was able to divine nothing from The Oblivion. Dran began to protest to the other 5.

He told them he would enter the Oblivion proper. He had spent 7 days in the Crawl and it had seemingly no effect at all on him. He began to grow certain if he just entered The Oblivion itself he would be able to reach out and touch the lost universes they had been unable to save.

The 5 began to protest. Not only did they love their friend dearly, but they themselves were not doing well. Raine had begun passing out for short periods of time and the other 4 were not fairing much better. But even as they protested Dran was inching his way closer. Closer and closer to the edge of Oblivion. For another entire day they argued and fought. Dran growing more confident the closer he came to the edge and the 5 growing more frantic about losing their friend and perhaps their very lives.

And finally, at the end of the day, Dran had indeed reached the edge of The Oblivion. He told the 5 he could literally, if he wanted, reach out and touch it. An incredible silence grew between them. It seemed the entire universe had grown still for this exact moment. The only faint sound they all could hear, was the steady, relaxing, bass like beating of Dran’s beautiful and terrifying heart. And then, after that eternal moment... Dran reached out. And touched The Oblivion. 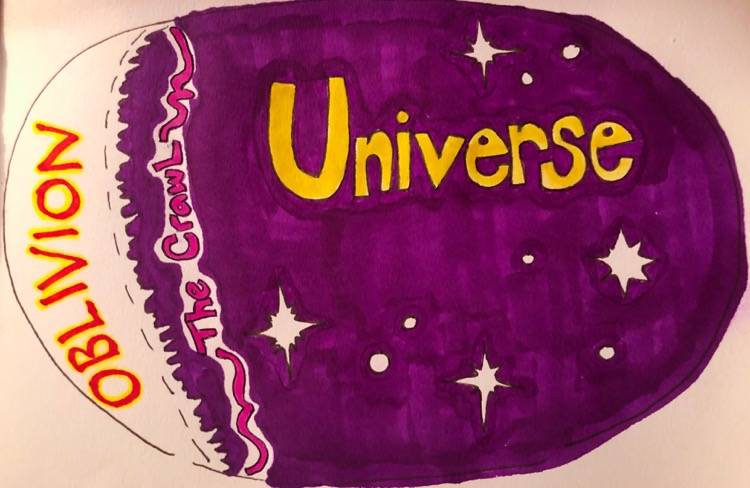 Notes on illustration: Here is a diagram of part of what was discussed in the first reading. One of the curiosities of The Oblivion is how it consumes a universe only from one side. Like a huge wave of silence absorbing everything in its path. Research into The Oblivion and The Crawl is further hampered by the fact that it is very hard to define where The Crawl ends and where Oblivion begins. Moreover The Oblivion also consumes multiple universes simultaneously.

Stay tuned for next weeks post & let us know what you think in the comments! :D